In a convivial atmosphere and with refreshments (and cake!) members of the Committee chose and played their specially chosen pieces of music.

Scroll down to read the Committee members' comments on their choices, including links to CD catalogue information where possible.

This was great way to conclude the season after the business of the Annual General Meeting was swiftly concluded. 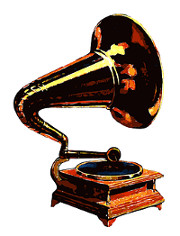 President Neil Crutchley cuts our celebratory cake. If you look closely at the icing you will see pictures of all our presenters this year.

Just a really cheerful start to the proceedings!

I played the first soprano aria from J S Bach's St Matthew Passion (Blute nur, du liebes Herz!) sung by Emma Kirkby on a recording by King's College choir, Cambridge with Brandenburg Consort, conducted by Stephen Cleobury & recorded on Brilliant Classics in 1994 as part of a set of all Bach's Passions. CD 65-1, 99369 1-3.

This was just as a reminder of the only occasion I sang the solo part (with all the other first sopranos in The Bach Choir!) at Royal Festival Hall on Palm Sunday 1963, when the soloist collapsed during this aria. Our conductor, David Willcocks, was confident that we could continue singing the soprano solos—there are only a few in the St Matthew Passion—and we did!

Since first hearing The Planets more than half a century ago, I have loved the music of Gustav Holst—especially when I began to explore his lesser-known works. In Holst’s case this means everything other than The Planets, The Perfect Fool ballet and the St. Paul’s Suite—yet his versatility is astonishing and his influence far-ranging.

The three short part-songs I have chosen illustrate to superb effect his musical imagination both in melody writing and harmonic language. The unaccompanied Splendour Falls on Castle Walls shows Holst’s innovative use of echo effects; Summer, from Two Eastern Pictures, evokes the sultry east with magical harmonies and charming use of harp accompaniment. Terly, terlo with its catchy opening phrase, is enchanting both melodically and harmonically. Again the accompaniment is unusual, this time for oboe and cello.

In these small pieces we hear echoes of music written decades after these works by such familiar names as Benjamin Britten and Richard Rodney Bennett.

The choir is the Holst Singers under Stephen Layton and the disc is called "This have I done for my true love" on Hyperion Helios CDH 55171.

As the Leicester delegate to the committee of the Federation of Recorded Music Societies I have made the acquaintance of its Treasurer, Welsh composer Paul Corfield Godfrey. During the period 1982–1997 he composed a series of 'epic scenes' drawn from JRR Tolkien's The Silmarillion. The cycle, extending in performance over four evenings, has a claim to be the largest-scale work of classical music written in Wales in the twentieth century. It is currently being recorded for the first time by members of Welsh National Opera, and the first instalment was recently completed: Part 4: The Fall of Gondolin.

The story is one of jealousy and betrayal. Jealous of the love between the hero Tuor and the elf princess Idril the dark elf Maeglin betrays the location of the hidden elf kingdom of Gondolin to the evil lord Morgoth (the supreme evil being compared to whom the evil Sauron of The Lord of the Rings was a mere lieutenant). Morgoth destroys Gondolin and Tuor and Idril flee the city.

The track I played was the haunting Epilogue in which the aged, mortal Tuor and his immortal wife Idril bid farewell as Tuor boards a ship to sail to the Blessed Realm.

Since the AGM a further installment has been released: Part Two: Beren and Lúthien, the great love story of Tolkien's epic corpus. Tolkien aficionados will know that the stone on the grave where Tolkien lies with his beloved wife Edith bears the names Beren and Lúthien.

As a lifelong lover of the pipe organ from my time as a chorister at Leicester Cathedral, I have used opportunities available on holidays to seek out the weird and the wonderful in pipe organs. These two tracks are instruments I have heard live on more than one occasion and the contrast between the vast 28,750 pipes of the organ in Philadelphia and the much smaller [3,622 pipes], though equally entertaining, theatre organ. The contrast between the virtuosic Vierne and the vulgar but enjoyable sounds on 'Mighty Mo' could not be greater.